Some of you know the Edwards family in Illinois and have had the great pleasure of eating their delicious produce.  This recipe and pictures comes from Ethan Edwards.

Three Day Catsup
This is another recipe that was handed down from my grandmother, Ida Knobeloch. It
makes an amazingly tasty catsup. I just finished a double batch last week. This recipe
ends up making about 8-9 pints, but there’s a great deal of acceptable variation in
exactly the quantities used, so one should have confidence in increasing or decreasing
the recipe.
Recipe
Cut up tomatoes to make five gallons. Put in crock or enamel canner and add 1 cup of
canning salt and mix well.

Tomatoes cut and salted
Cover and let sit three days. Check daily. A dull or whitish mold will start forming on
the surface as the tomatoes begin to ferment; stir this in each day to bring different
tomatoes to the surface.

Tomatoes on Day 3 after fermentation

By the third day, most of the water and many of the seeds will have separated from the
pulp which will be floating on top. Lift the pulp, trying to leave as much of the water as
possible, and bring to a boil in a stainless steel pot, cooking about 10 minutes or until
hot through.

Cooked pulp with skins and seeds

Put this pulp through a sieve or food mill to remove the pulp from the tomato skins and
the remaining seeds. 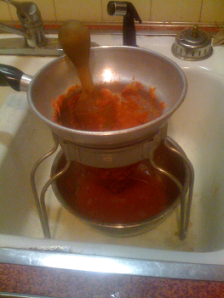 Return the pulp to the stove. Add two cups vinegar, 7 cups of sugar, about 2 cups
of onions chopped fine, and about 1 tsp. cayenne pepper, and pickling spices tied in
cheesecloth (about the size of a walnut or so). Bring to a boil.

Cook until desired consistency is reached (about 1.5 hours), stirring periodically. Ladle into hot jars and seal.